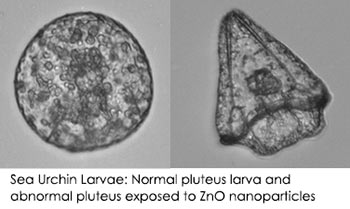 The Toxicology Laboratory has been participating in a multidisciplinary center award (5 years and just renewed for another 5 years) from the NSF and the EPA that established the University of California Center for the Environmental Implications of Nanomaterials (UC CEIN), based at UCLA and UCSB. This center award has a number of multidisciplinary “themes” that range from chemical engineering to public perception of nanotechnology. At BML, the effort has been a collaborative one with scientists at UC Santa Barbara on the effects of engineered nanomaterials on estuarine and marine organisms. The physical behavior of different nanomaterials in environmental media indicated their behavior in seawater was quite different than freshwater and a collaboration with UC Santa Barbara and published in Nature Nanotechnology showed that nanomaterials could undergo biomagnification up the food chain. Very common metal oxide nanoparticles are highly toxic to developing sea urchin embryos, and may impact coastal marine ecosystems in ways previously not considered for adult organisms.