BML has had a long history of salmonid research, with a major project on enhancing the endangered winter-run Chinook salmon in the 1990s, followed by research on fish health in local endangered Coho salmon in the 2000s. The unique salmonid facility at UCD has large tanks with seawater and freshwater sources for holding broodstock under environmental conditions, a hatchery, and a grow-out facility with fish pathogen capabilities. 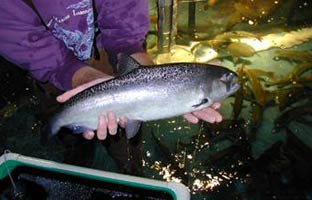 Pacific salmon are a symbol of the wild Pacific Northwest. Due to their reliance on high-quality freshwater and marine environments, their abundance is an indicator of coastal ecosystem processes and habitat quality of aquatic environments. Once spectacularly abundant, salmon runs up coastal rivers are substantially reduced below historic levels. Population declines have been attributed to poor ocean conditions, loss or deterioration of freshwater and estuary habitats, fishing pressures and hatchery practices.

BML was involved in a project to reverse this trend by collecting information that informs fisheries management decisions. Over 20 years, research was conducted on endangered salmon populations: winter-run Chinook salmon (Oncorhynchus tshawytscha) in the Sacramento River and coho salmon (Oncorhynchus kisutch) along the central California coast. This work, conducted in specialized on-site salmon facilities, was collaborative with state and federal resource agencies, land managers, and researchers working together to identify management needs and conduct scientific studies that can identify solutions.

From 1992 to 2004, BML managed the captive broodstock program for Winter-run Chinook salmon of the Sacramento River. Since 1994, Sacramento River Winter-run Chinook salmon (WRCS) have been listed as endangered under the Endangered Species Act (59 Federal Register 440) due to a declining population trend. In 1989, the U.S. Fish and Wildlife Service (USFWS) began propagating Winter-run Chinook (Oncorhynchus tshawytscha) by trapping returning adults and spawning them in captivity and subsequently releasing their progeny. This program was intended to supplement natural production. Concurrently, a captive broodstock program was initiated to provide a further measure of protection against extinction, with fish reared in captivity for their entire lifespan. For over thirteen years, BML was an active partner in this recovery effort, serving as a site for the captive broodstock program.

Annual monitoring by the USFWS and the California Department of Fish and Wildlife (CDFW) have shown that the number of Winter-run Chinook returning to the upper Sacramento River have increased in recent years, with population abundance estimates of 8,120, 7,360 and 8,133 fish for the years 2001, 2002 and 2003, respectively. Given this upward trend when compared to the last two decades, the USFWS, NOAA Fisheries and the CDFG have recommended the withdrawal of the captive rearing component of the draft winter-run recovery plan. Consequently, the WRCS captive broodstock program at BML was ended in December 2004. The draft recovery plan for WRCS specifies delisting criteria that require a mean annual spawning abundance of 10,000 females and a cohort replacement rate greater than one over 13 consecutive years. While these levels have not yet been met, there has been a general trend toward increasing population size. Supplementation activities will continue in the future to boost the wild population, but the formal withdrawal from the captive broodstock component of the program is an encouraging step, and one indicator of “success” in the recovery of this endangered species.

During the captive broodstock program at BML, resident faculty and staff, as well as collaborating scientists from other institutions, conducted original research resulting in 24 publications on topics relevant to salmonid conservation biology. Highlights include the development and application of microsatellite markers to resolve the genetic structure and diversity of Chinook salmon in California’s Central Valley and the first major infectivity trial to assess the role of genetic diversity in disease resistance of fish.

BML also participated in a restoration program for coho salmon of California's Russian River in Sonoma County. The Central California Coast (CCC) Coho salmon ESU, or evolutionarily significant unit, was listed as threatened under the Federal Endangered Species Act on October 31, 1996 by the National Marine Fisheries Service. Coho salmon was listed as endangered under the California Endangered Species Act in August of 2002. Goals of the Russian River Coho Salmon Captive Broodstock Program (RRCSCBP) included conservation of the genetic resources of Russian River fish populations, using captive propagation methods. In addition, the program was intended to provide opportunity for research on the effective use of artificial propagation (NOAA Fisheries 2004). At BML, we studied the effects of photoperiodic manipulation and water temperature on reproduction of captive broodstock. Other parameters can influence sexual maturation and spawning, including the nutritional status of the adult broodstock, and the amount of time spent in both freshwater and seawater phases during rearing.

Captive breeding programs can be an indispensable tool for reintroducing or sustaining populations in the wild. BML research improved broodstock management practices by providing information that reduces the risk of genetic diversity losses, developmental problems, and disease.

Diseases are emerging as a leading threat to wild salmon population recovery. Molecular identification techniques developed at BML that identify pathogens are improving broodstock management practices and protecting our fisheries.